What is a KE-Inject® Hybrid System?

The KE-Inject® Hybrid textile ducting System is produced in the form of round (Ø), half-round (D) or quarter-round (½D) ducts and is made of a permeable textile material with groups of small lasercut holes in the duct surface.

The Hybrid system combines the best properties of a low impulse and an inject system. The lasercut holes are placed in the same three patented hole designs as with the KE-Inject System.

In short, the KE-Inject Hybrid System comprises low impulse ducts which are made active by using lasercut holes. 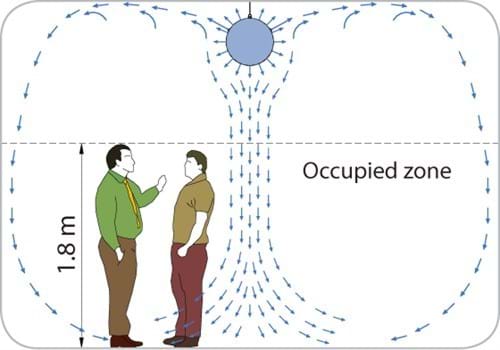 Just adding a few rows of holes can change the flow from a passive low impulse system to an active mixing system. But the major benefits of this new technology are that you can, in theory, actually dimension one and the same system to be passive in some zones and more or less active in others.

Adding a few laser cut holes to a system with a low ceiling will allow us to provide heating as well as ventilation and cooling.

Order our catalogue below to read more about the KE-Inject Hybrid System.

Order our catalogue for further information 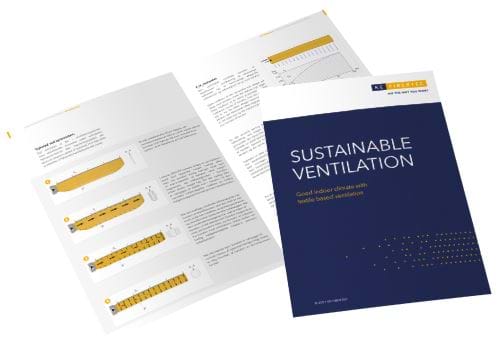 Dual Arch mounting brackets feature the stability of double rails but at the same time are quick and easy to install.

Large textile ducts will be firmly suspended both with and without the air turned on and installation time is reduced considerably as the ducts are mounted in a single ceiling rail.

The frame system can be constructeed on the floor then lifted up to high level.

Duct Arch is a pre-bent aluminium rail mounted in hidden sewn-in pockets in the TBV ducts. The hidden Arches reduce sagging when the air is off to prevent snagging on other services. It also and prevent popping if no soft-start is used.

The unique Safetrack is designed in a way so that the Arch brackets are easily clicked onto the ceiling rail without any tools.

The Safe 360° system consists of removable steel rings fitted every 1000 mm or 500 mm. The stainless steel rings are secured with velcro inside the ducts at 12, 3, 6 and 9 o'clock so they can easily be removed for washing.

The ducts will keep looking inflated, this is our best solution if a soft start cannot be fitted.

We are able to offer curved textile ducts designed for a specific radius and with Safetrack rails that follow the shape of the duct. This product can be combined with both ordinary passive low impulse systems and with our hybrid solution in which the low impulse system is made with lasercut inject holes.

A good example is the system that KE Fibertec supplied to Algida Unilever's main office in Istanbul.

For systems with difficult access, for instance in swimming pool areas where the TBV systems are suspended above the pool KE Fibertec offers a solutions with cord pull called Mount Easy. The Mount Easy system enables a single person to install textile ducts of up to 40 metres from one end.

Specific types of suspension systems are now also available in any given colour. All visible parts are powder coated in a high impact-resistant quality finish.

KE Fibertec recommends the D-Lite Alu® rail for D-shaped systems with dimensions up to D800 mm.

The rail is produced very simply and facilitiates fitting on level false ceilings. This rail is used to provide a competitive edge as an alternative to D-shaped systems in premises where the finish and appearance have high priority. This type of rail is also suitable where access is difficult.

KE Fibertec recommends the D-Alu rail in premises where the finish and appearance have high priority, as well as for D-shaped ducts with bends and sharp elbows. The specially developed closing system is ideal for use in both horizontal and vertical systems. The D-Alu rail is suitable where access is difficult.

Sign up for our newsletter and get a free design guide for textile ducting.